Among the Least of the Cardboard City


Fr. Damiano Tina, a PIME Missionary at Ecatepec, works in one of the shanty towns on the outskirts of Mexico City: “I’m here to stay with those who live on the edges of society. Often I meet the Lord, who is already working here.”
The shacks are crowded along the train tracks, in the Cartonera, one of the slums on the outskirts of Mexico City. It is here that “The Beast” passes; the freight train that crosses all of Mexico, from the South all the way to the US. It is a means of transportation that has become famous because the migrants from Central America try to get onto its moving cars to hitch a free ride to the north. What is happening around here is no less dramatic, thousands of people piled up in shelters erected quickly, having to deal with violence and heartless neglect by everyone. “Not even the Mexican police enter here,” Fr. Damiano reveals. This is his home; this is his community, which we are here to meet. They are waiting for us in the square in front of one of the barracks, to listen to the Word of God together. Right here where a community is beginning to take root.
Originally from Milan, Italy, the 45-year-old PIME Missionary has been in Mexico since 2006. He has carried out his priestly ministry in Guerrero for 10 years now; first in the suburbs of Acapulco, then in the mountains among the Mixtecos, and finally he arrived here, in the vast suburbs of Mexico City. His mission: to open a new presence of PIME on the edge of a metropolis of 25 million inhabitants. “Since 2016 I have been here at Ecatepec,” Fr. Damiano explains. “With its 5 million inhabitants it is the largest municipality in the whole Republic of Mexico. It also forms a diocese in its own right; without even realizing it, one simply has to cross the street to find oneself in the territory of Mexico City.”
Fr. Damiano lives on the edge of a metropolis, in an extremely difficult context. “These are forsaken suburbs, unsafe, marked by violence and inhabited by people who have come here from different States of the Republic, in years when population growth was very strong,” says Fr. Damiano. “In the area where we are, there is also a strong indigenous presence of Nawatl communities; they are groups originally from the State of Vera Cruz, on the Atlantic coast. The first ones came here looking for jobs 40 years ago; but now we are already in the second and third generation. The Bishop of Ecatepec wanted PIME missionaries here to take care of them.” 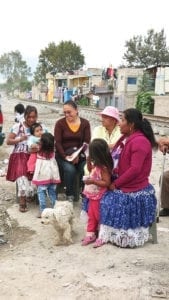