The Saints Next Door 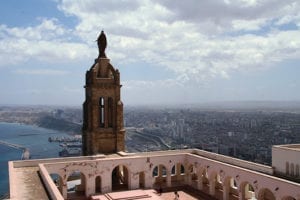 By Fr. Piero Masolo, PIME
In Algeria for the past four years, a PIME Missionary re-reads the figures of the 19 Algerian martyrs to be beatified: “I often feel that they are accompanying me.”

“Our Church is experiencing an intense joy, we are given the grace of being able to remember our 19 brothers and sisters as ‘martyrs’, that is -according to the most proper meaning of this term- ‘witnesses’ of the greatest love, that of giving one’s life for one’s friends.”
The press release just arrived in my mail, it is for January 27, 2018, signed by the four Bishops of Algeria, Paul Desfarges of Algiers, Jean-Paul Vesco of Oran, John McWilliam of Laghouat-Ghardaïa and Jean-Marie Jehl, Apostolic Vicar of Constantine.
We were waiting for the news that on several occasions we talked about it among ourselves and with friends; but now, finally, this is it: it is official, our dear “older brothers and sisters”, they really are “saints next door”.  Hamdoullah! It is the first word that spontaneously comes to my lips: “God be praised”. This daily expression, heard a thousand times in Algeria, is on everyone’s lips. Almost to say: how can one live without thanking God every day?
I continue to read, “Our brothers and sisters are models on the path of ordinary holiness. They are witnesses with a simple life that is completely given to God and to others, that can lead us to the apex of the human vocation. Our brothers and sisters are not heroes, they did not give up their life for an ideal or a just cause, they were simply members of a small Catholic Church in Algeria, which, although largely constituted by foreigners, and often considered as foreign, has drawn the natural consequences of its decision to belong fully to this country. It was clear to each of its members that when one loves someone, one does not abandon that person at the moment of trial. It is the daily miracle of friendship and brotherhood. Many of us have known them and have lived with them. Today their lives belong to everyone, and they now accompany us as pilgrims of friendship and universal brotherhood.”
I have been here in Algeria since 2014. Our “older brothers and sisters” were killed between 1994 and 1996. What do they have in common with me? Why do I feel them so close? Why do I feel the need to know them more and to remember them? Why, digging a little, does it seem as if everyone is talking about them? Why, often, do I have the impression that they are accompanying me?
Entering the Basilica of Notre Dame d’Afrique in Algiers, which many call “Madame l’Afrique”. I walk in the nave, arriving in front of the steps leading to the altar and looking to my right, in the transept where the Santa Monica chapel is situated. On the wall of the apse are nineteen colored panels with the names of our brother and sister martyrs. At the foot of the altar, there is a tombstone under which is buried Cardinal Léon Etienne Duval, a great friend of the Algerian people. I stop in silence to observe the majolica slabs, one by one. Every name is a story of desires, labors, joys and sufferings and a common destiny: having spent one’s life here, trying to follow Christ.
I think about how Ben Cheneb’s library would be today if Henri and Paul Hélène had continued their efforts there. How many other young people could have been helped to grow into adulthood? I think of the White Fathers of Tizi Ouzou, who immediately knew how to return to Cabilia, to the region with more Christians than the rest of the country, and reopen a new community. Despite having lost Jean, Alain, Charles and Christian. I think of the Tibhirine monastery: who knows what it would be like if there were still a community of monks? What else could Christian’s “thirsty” mind have written and given us? What “lung” could he have been for us, for this Church? Fr. Jean-Marie Lassausse has spent 15 years of often-solitary presence as a priest of the Mission de France, and now finally a community has returned to Tibhirine thanks to Chemin Neuf.
Their shed blood is now in the hands of God. For us they are “guardian angels” together with Saint Augustine and Saint Monica, originally from Tagaste (today Souk Ahras, in the Eastern Algeria); the martyrs of the first centuries like Saint Marciana of Cherchell, Saint Salsa of Tipasa and many others; Cardinal Charles Martial Allemand Lavigerie, who wanted the Basilica of Notre Dame d’Afrique; Brother Charles de Foucauld, who lived in the desert at Beni Abbes and then at Tamanrasset where he was killed. Or again, Little Sister Magdeleine, founder of the Little Sisters of Jesus in 1939 in Touggourt; and Cardinal Léon Etienne Duval, Archbishop of Algiers, who is buried here before my feet; and many other unknown faces whom from heaven watch over us.
Previous StoryMission in the Heart of the City
Next StoryBrother Ocean