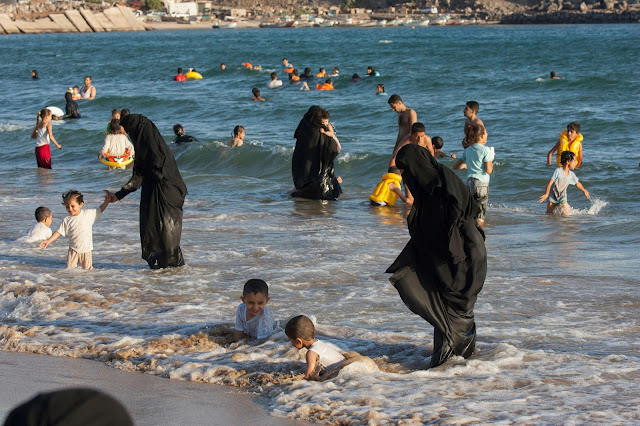 A year after the killing of four Missionaries of Charity and the kidnapping of a Salesian Priest, Yemen continues to sink into a war that seemingly rages on, unnoticed.

In the city of Aden, on the shores of the Persian Gulf where the atmosphere is sweeter, a hundred people crowd the beach, happy. The children are swimming and playing; teens compete in a race on dangerously pieced together motor bikes; young men stroll in their futa (a skirt for men like a long sarong, native to the tribes Hadramaut); women walk carefree through the surf dressed in their hjiab and abaya, with sunglasses like Jackie Kelly, and waterproof pants, among the crowd of family and friends and children who make their first steps into the water. The sun is hot but sweet, high in the sky yet not as merciless as you’d expect for the region. In this plot of land, the city of Aden has been unchanged by its surroundings. Here, you would not think that Yemen is a country at war; were it not for some small details: red bags and blue nylon junk, small and collected on the beach a little bit more than normal, slight reminders, but not much out of the ordinary.

A few kilometers from here everything changes: in the Port of Mocha, government troops and rebel Houti just finished intensely fighting for control of one of the most strategic outlets to the sea in all of Yemen, the latest blow to their opposition on the South Coast of the country. Elsewhere, more blood is shed, with the line of fire resting on the city of Taiz, just below the former capital of Sana’a. More specifically, not too far away from all of this in the city’s center the tension is at its highest. This is the same area of the former guest house of the Sisters of Charity, where, a year ago, on March 4th, armed commandos raided the house, brutally killing a group of Missionaries of Charity, the order founded by Mother Teresa. Included on this massacre were all guests of the house: disabled and elderly people all from the local community, for a total of 14 people, capping off their terrible act by kidnapping Fr. Tom Uzhunnalil, an Indian Salesian Priest who led the small community.

The area is now inaccessible to journalists, just as with the Aden military facilities, training camps, and the lavish palaces of the loyalist government institutions. You cannot take photos or video without permission, under strict penalty of imprisonment; this has made it virtually impossible to find any witnesses who saw or heard anything because they are afraid of punishment.

A resident who wishes to remain anonymous, says: “This city is highly insecure. Better not to show up, not to rule. You never know what can happen. We are at the mercy of terrorists. “ Fr. Tom was not seen again until this past Christmas, appearing in a video spread online by his captors. He appears there to be emaciated, malnourished, with a long beard. Speaking in English he claims to have been abducted just because of his missionary activities in Aden. Appeals have been made to the Prime Minister, Indian Heads of State and Church, the Pope, the Apostolic Vicar of the area Bishop Paul Hinder, to deal with the kidnappers, before Fr. Tom’s health deteriorates permanently. To date, there have been no details on the identities of the kidnappers. The Yemeni government and residents speak of an al-Qaeda group, the Indian media circulates the belief that it is the ISIS of Aden because of the brutal methods of the executions of the previous victims and that is what sister Sally, the only survivor of the massacre, has reported. However, no one has claimed responsibility for the horrific actions. Still the place of Fr. Tom’s imprisonment, and the identity of the culprit terrorist group are not yet officially known. One thing is certain, and it is plain for all Yemenis: al-Qaeda in the Arabian Peninsula (AQAP), “today is stronger than ever” according to the International Crisis Group (ICG), a think-tank on International Policy based in Brussels. They maintain that the AQAP thrives “in the generalized collapse of the state, parallel to the growth of sectarianism; it is looking for shifting alliances, taking advantage of security holes and is growing in a thriving war economy. “

AQAP, in essence, has evolved into an insurgent force with the ambition and ability to govern the territory, by being extremely pragmatic and attentive to local problems. This means that, together with its local affiliates, it will likely survive the rapid global rise of ISIS, which has pursued a more aggressive approach, but that does not hold the same ideologies at its roots. According to ICG, “the continuation of an increasingly fractured conflict greatly improves the unprecedented ability to AQAP to expand local support and accumulating financial and military resources.” 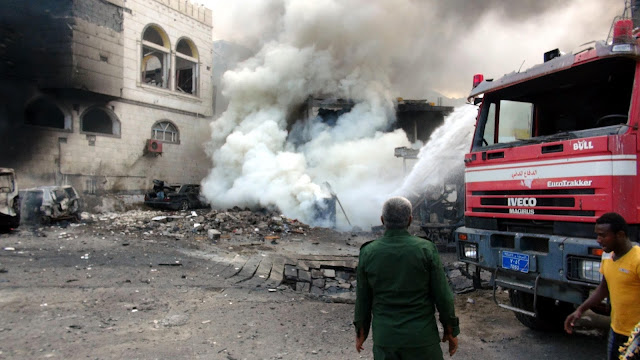 One of the most effective alliances that the AQAP has developed in the south of the country, for example, is one with the liberation movement of the South: Hirak, the Southern Yemen Seperatist Group. It is not an official agreement, and Hirak executives deny it, but to many it is obvious. Such as those of us who journeyed on the road some twenty-five miles to the south of the former capital of Sana’a – that in areas of dirt tracks that meander this area of the Hadramaut (the Southern Region of the Arab Peninsula), here checkpoints that fly the same Hirak flag are frequented by al-Qaeda militants from the local tribes. The story is the same in the villages on the south coast, between the border with Dofar and the port city of Mukalla. Just as they are “liberated” by loyalists they are speedily conquered by al-Qaeda, the checkpoints are bustling with men armed to the teeth with pickup trucks and cars brazenly displaying pictures of Saddam Hussein, and the symbols of the Iraqi Baath party. It’s a sign, at least, of ideological affiliation with the Sunni resistance in the post-Saddam Iraq, a portion of which then opted for the support of the, then young, Islamic state.

Ahmed al Waesaij, investigative journalist from the Yemeni Arij (union of Arab investigative journalists) draws a profile of the city today: “The war has made Aden a very dangerous city. In fact, the government has limited control and the area is completely porous to criminal infiltration: they are de facto an integral part of al-Qaeda or self-affiliated with ISIS or independent criminal groups.” His point is affirmed whenever checkpoints or military facilities are hit because AQAP always claims the attacks. “They amplify the terror of the inhabitants and totally disrupt life in the city, already proving this tim year of the war, with clashes at the port, the airport and neighborhoods joined by Houti rebels. There is also the hypothesis; nearly proven intelligence, that many al-Qaeda have been already transferred from the Iraq area to Yemen by sea. “

In the two years of war, the conflict has caused more than 7,300 deaths, wounding 39,000, excluding bombings, deaths from clashes among civilians in the cities were more numerous in Aden and Taiz than anywhere else. Amira al Sharif was born in Aden but resides in Sana’a. He came back to his birthplace in order to carry out a photographic project on the lives of civilians in the war: “This city has changed considerably: it’s difficult to find an apartment for rent, difficult to move freely in the streets; the feeling of being under constant siege or threatened attacks there. We live day to day. There is also good: I find a lot more people every day on the beach, people of all ages. When you do not know what is in store for you tomorrow, life has more flavor, despite the pain of having lost a family member. Even despite hunger. “

After a couple of years of war, in the poorest country in the Middle East, hunger is likely to complete the work that the war has not; especially in the North, completely isolated from humanitarian aid and movement of personnel and equipment: according to the World Food Program: 14.4 million people are at risk and already 7 million are in desperate need of food aid. Among the sidewalks of the city of al Gheyda; a focal point of goods, travelers and refugees from the Horn of Africa on the way to the north of the country are more families who beg than those who buy and trade. Nearly all are people of African origin, dark-skinned, called muhamasheen that literally means “those at the margins”.It is they who pay the highest price of hunger from the war in Yemen, with one in five children dying of malnutrition. Hospital al-Thoura of Hodeida on the northwest coast of the country, an area of ​​Houti rebel control, in the section for the care of malnourished infants, a four-month-old baby, reduced to a skeleton, died before our eyes. The grandmother, a muhamasheen, gathered up the body precisely in chenille cover, she then grabbed her things: a couple of bags with clothes and medicines. She told us without a look of pity, her grandson in her arms, “This is the second death in less than a year.”