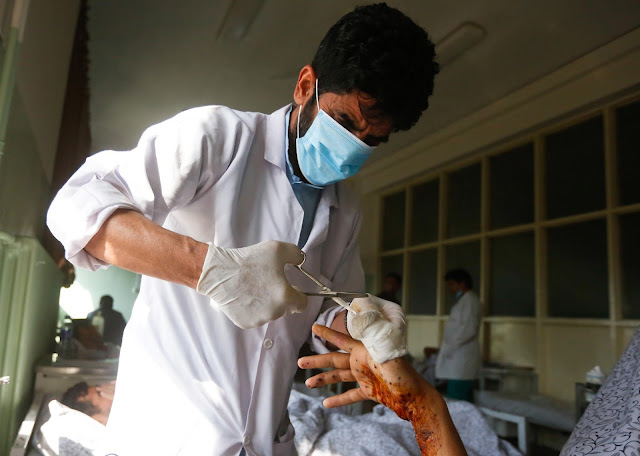 Multiple hospitals affected by different factions in different war zones worldwide share a ghastly commonality in recent days: they have been deliberately attacked. What was once a commonly accepted area of détente has become yet another killing field.

Afghanistan, Syria, Yemen, and South Sudan: from the Middle East to Africa multiple hospitals, health professionals, and patients have been caught in the crossfire of opposing forces. Doctors Without Borders denounces the increasingly common practice as, “a tragedy in that, in addition to being an unacceptable affront to international humanitarian law and the laws of war, it deprives millions of people of the possibility of resorting to medical care,” says Renzo Fricke, Doctors Without Borders Operations Coordinator in Afghanistan.

One of the latest attacks, in a long series of attacks, took place on March 8th against the Sardar Mohammad Daud Khan Hospital in Kabul, Afghanistan. Fighters entered the hospital, which is located outside the military embassy, and opened fire for several hours, killing thirty and wounding sixty others. The heinous attack was later claimed by ISIS. “For any religion” says President of Afghanistan, Ashraf Ghani, “a hospital is a buffer zone, free from violence. What happened today is an attack on all Afghanis; it is the proof of total lack of respect for these people and for human values in general. “

Unfortunately it’s not only the terrorists who target hospitals. In Yemen, for example, hospitals run by Doctors Without Borders have often been hit by shelling from above despite all sides in the conflict know the coordinates of the medical facility.

On May 3rd 2016, the Security Council of the United Nations adopted resolution 2286; strongly condemning any attacks against medical facilities and demanding that all parties in a conflict respect fully their obligations under internationally-accepted laws. Nearly one year after that resolution, the U.N. and its condemnations have gone unheeded.

“Despite the recent United Nations resolution that calls for an end to attacks against medical facilities, and despite the high-level declarations so that international humanitarian law may be respected, it does not appear that any attempt is being made by involved parties to respect medical personnel and patients,” said Teresa Sancristóval, Head of the Emergency Unit in Yemen, “without direct, energetic action, these public gestures are meaningless for the victims. Whether these attacks are due to negligence or are intentional, they are not unacceptable. “

Hospitals where Doctors Without Borders work are often in areas where no other health services are guaranteed. In Yemen a hospital in Haydan which was evacuated on October 26th recently reopened after a series of attacks of which it was the direct target. It is the dramatic testimony given to Vatican Radio by Francesco Segoni, Doctors Without Borders Coordinator in the country: “The health system is in shambles: even in Sana’a, the capital, the larger hospitals are now completely dysfunctional; they no longer have the means or financial resources to treat patients. They cannot pay their staff; they cannot get needed medications, and they have no more antibiotics or medicines. They do not even have electricity to run the hospital. The situation in the poorest and remotest regions of the country is truly catastrophic. Even the most trivial of health problems today may become a tragedy for the Yemeni people. “

Previous StoryGuinea Bissau: A Work in Progress
Next StoryPriests in the Crosshairs – PIME in Mexico